As you may be aware, RESCO Electronics has been around for quite a long time.  In fact, 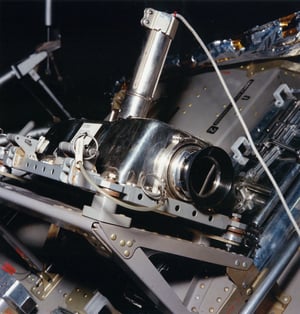 RESCO was founded way back in 1932 as Radio Electric Service Company.  Over its 87 year history, RESCO has been involved with many customers in many different projects.  Perhaps no single project was of the historic significance as was RESCO’s involvement in the Apollo 11 LM camera system.  As our nation celebrates the 50th anniversary of mankind’s first trip to the moon, the team at RESCO looks back with pride on this accomplishment and its small, yet important, contribution.

In 1964, NASA awarded the Westinghouse Electric Corporation a contract to build a TV camera capable of withstanding the harsh environment of the Moon and broadcasting video images 240,000 miles back to Earth.   Five years later, this camera flew on Apollo 11 and captured one of the most important events in the history of

mankind; Neil Armstrong’s decent from the Lunar Module to stand on the Moon’s surface.  The moment captured by the camera not only included Armstrong’s first steps but also his famous quote “One small step for man, one giant leap for mankind”.  Radio Electric Service Company, now RESCO Electronics, was a supplier of electronic components and an integral contributor to the Westinghouse camera program.

The first picture on the top right is of the camera mounted on the Lunar Module.  The second picture is a still image from the famous video that the camera captured of Neil Armstrong stepping onto the lunar surface.