In a blog posted last spring on this website titled "When Does Contract Manufacturing in Mexico Make Sense" Fred Morr provided a great review of the circumstances our experience has shown that selecting a contract manufacturer with production in Mexico is the most advantageous.  Fred compared and contrasted domestic contract manufacturing with production in Asia and Mexico.  He included a simple table which I am providing again below that is a great first pass reference tool.  If you haven’t had a chance to read this blog I encourage you to do so.

Although as Fred pointed out in his blog, the economics of contract manufacturing in Mexico have been good, they have strengthened significantly over the past nine months.  Specifically, manufacturing assemblies with a high labor content, that is to say assemblies where a significant amount of the cost is in the production labor, have gotten even more cost effective.  This improvement is directly tied to the strengthening of the US dollar relative to the Mexican peso.

Below is a graph that shows the year-over-year percentage change in the value of the dollar as measured in Mexican pesos.  Beginning in November 2014 the dollar began to appreciate relative to many world currencies and the peso was no exception.  As you can see from the graph, the dollar had risen by about 12% at the end of 2014 (relative to its position 12 months earlier).  By the end of July 2015 the US dollar had climbed by a whopping 23% as measured in Mexican pesos vs its position a year earlier.

What this means is that the dollar now buys 23% more Mexican pesos than it did on July 31, 2014.  Or said another way, it has become less expense to manufacture in Mexico than it was a year ago. 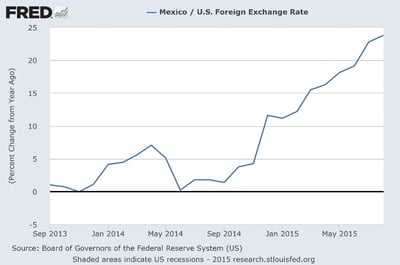 The Improvement is Real but Less than the Numbers Suggest

Although there is no doubt that the appreciation of the dollar has made manufacturing in Mexico even more cost effective, the improvement is not as great as absolute percentage change in the exchange rate suggests.  There are three main reasons this effect of the strong dollar is moderated.

The Cost of Production in the US is Going Up

Unfortunately, the surging dollar is not all good.  As mentioned above, the dollar has been appreciating against most of the world’s major currencies.  The graph below shows how the dollar has performed against a trade-weighted basket of currencies.  “Trade-weighted” means that, for the purpose of this analysis, currencies from around the world are blended together based on the amount of trade the US does with countries using each currency.  This type of analysis gives a clearer picture of how the dollar is fairing overall.   As the graph shows, the dollar has been appreciating and, in fact, is up on a trade-weighted basis by 12.5% over for the one year period ending on July 31, 2015. 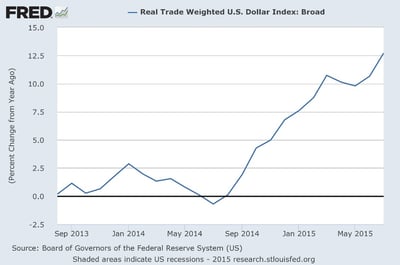 Of course, this appreciation means that US domestically manufactured product has become significantly more expensive around the world.  This, in turn, means that demand for US products is under pressure.  One way to reduce the cost of US manufactured product and at least partially offset the effect of the rising dollar, is to outsource the manufacturing of sub-assemblies to contract manufacturers with operations in Mexico.

The strengthening US dollar has made the economic argument for outsourcing the manufacturing of many types of assemblies and sub-assemblies as strong as it has been in years.  That said, this cost benefit is not the same for all types of assemblies with the biggest benefit being for assemblies with a relatively high labor content.  The benefit of the strengthening dollar is also moderated by material purchases (which are made in dollars), Mexican inflation, and currency hedges.  In a time when the cost of US exports is rising right along with the dollar, outsourcing the production of certain assemblies, especially ones that can be manufactured in Mexico, can be a way to partially offset these cost increases.