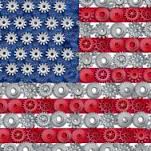 decades.   As the only major industrialized nation, not leveled by WW II, the US accounted for around 40 percent of the world’s manufactured goods in the early 1950’s.   After a relentless wave of imports from Europe and eventually Japan, the US experienced a dramatic loss of market share in many industries.  Fears of the loss of US industrial competitiveness were great.

Then came the Chinese.  With its seemingly limitless supply of low-cost labor and an enormous fast developing domestic market, an artificially low currency, and government incentives to attract foreign investments, China and other Asian nations presented an even greater threat.

But just when US manufacturing had seemingly reached the point of no return, a crucial change began to take place; wages in low-cost countries have soared.  Wages in Asia between 2002 and 2008 rose by about 7.8% per year. Due to the 2008 financial crisis, wages in American manufacturing have declined by 2.2% since 2005.  In contrast pay and benefits for the average Chinese worker increased up to 19% between 2005 and 2010.  The Chinese workers then began to strike more frequently with the government often telling management to meet their demands, avoiding labor unrest but causing wages to rise steeply.   Today, China’s labor market is overstretched and the high quality labor has been exhausted.  This has left Chinese manufacturers increasingly scrapping for unskilled labor and dealing with increasing quality problems.

China’s overwhelming manufacturing cost advantage over the U.S. is now shrinking.  Based on

current trends, rising Chinese wages, a weaker dollar and other factors will virtually close the cost gap between the U.S. and China for many goods consumed in North America.  In addition, the U.S. workforce is becoming more flexible and productivity is rising.  High unemployment has brought the American worker a willingness to work for lower pay and lesser benefits.

Manufacturing of some goods will shift to nations with lower labor costs such as Vietnam, Indonesia and Mexico; however these nations’ ability to absorb the higher end manufacturing is limited by inadequate infrastructure, skilled workers, and domestic supply networks.  And let’s not forget the risk to personal safety in some countries.

All this is leading to the reallocation of global manufacturing to America.  With its increasingly flexible workforce and resilient corporate sector, the U.S. is becoming more attractive as a place to manufacture many goods consumed on this continent.  Reshoring will be further boosted by the use of advanced manufacturing techniques that promise to alter the economics of production by making it far less labor intensive.  For example, the use of 3-D printing for prototyping and small production runs and the increased use of robots are having a profound impact in many industries. 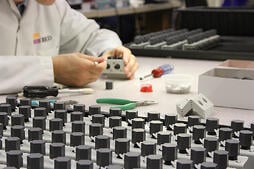 fully account for total landed costs not just unit costs in local currencies.  This analysis should include shipping costs, quality costs, communication and travel costs, and the costs of longer lead times and reduced flexibility.  Many might just find that the U.S. is now the low-cost option.

Deborrah has over 25 years of experience in the electronics industry. During her career, she has served in many

roles from inside sales to account management.  Deborrah has worked extensively with customers in the medical and aerospace industries on a variety of applications and routinely interfaces with both procurement and engineering professionals in those industries.   As a result of her experience and the value she delivers, Deborrah has built numerous, long-lasting relationships with most of the customers with whom she has worked.  Deborrah currently resides in Bel Air, MD with her husband.